Greetings from the insane mind of Megavalhalla and today I have something quite nice for you all
today… a review on the new Tau miniatures and codex. Let me start off by saying that no, I am not a
bitch anime fan who is into Mecha suits who loves Gundam Wing… I am a no
rmal war mongering hate
fuelled typical 40k fan who cannot be any more against the greater good. For starters I do not believe in
a fascist regime, hence I am not a stereotype… the idea offends me.

As I first laid eyes upon those new minis, I was taken back and realized that maybe GW has picked up
their game, so I decided to go out and buy a Broad side, Path finders and a lovely box of Crisis battle
suits. I have always had soft spot for Tau and I have always enjoyed their unique models with all the
sloping panels and very rare hard edges, so I have always indulged in the idea of painting some up and
now the wait is up and well worth it. I have also had so many grudge matches against a good friend
of mine using Black Templars against his Tau… so many memories, I enjoyed every moment of those
games.

The Crisis suits have had a massive price reduction here in AUS, which was a good move by the GW
financial team, a drop by $41 is a massive difference, but besides that nothing new here except the
package… let’s move along, shall we?

The Pathfinders are excellent in every way possible, the flash is reduced, the detail is finer and the sprue
has all these nice little extra details you can glue on. Speaking of gluing, these kits are ridiculously easy
to put together, I literally threw the instructions out the window. They are similar to tau fire warriors
but way more detailed and it was really pleasing putting them together, though I do feel like they lack
poses, this is due to the way the legs are positioned and lack of variety in leg poses. If you are a painter
like myself you will really enjoy this kit as this kit does have value for money, 13 models for $48 isn’t too
shabby. 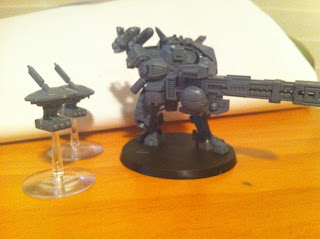 Now on to the Broadside! What a beast of a model this is! Although, this model was a bit complicated
for me… not so much the body, it was the legs that did it for me. It was difficult to glue the legs to the
base and the legs to the pelvis all at the same time, but once was that out of the way, I was laughing.
It was a breeze beyond that. More fine details are littered all over the model, you could almost imagine
it working IRL and being able to point out all the joints and working mechanisms is fantastic. Once this
kit is done you have tonnes of spare bits, nearly all of which will be used on my Crisis suits… once I get
around to building them (sigh). To me $74 is a bit much… $65 would be more appropriate.

The codex, which I did not have enough time to review properly, but I can assure you it is a really clean
codex which is easy to read and follow. I do think that a lot of people will enjoy using it… it is a lot better
than the previous one and has been updated to today’s standards. The codex does give you the feel
of innovation and technology/technological advancements, which really does support the Tau theme
something which I really enjoyed.

The codex itself will not change the way Tau are played at all. It is really well balanced, well written and
really well presented… BUT there will always be fire warriors and now there is just a greater variety of
suits. Nothing in this codex screams to me ‘different’ it is just new and done up, quite like putting on
some make up and buying a new outfit. Nothing new really when you think about… still the same old
weaponry and gear even with the new shiny models such as the Riptide and Tiger Shark. Seriously guys
nothing has changed. Which is probably a good thing, especially for the hard core Tau fans, they deserve
it. Because when I think back to the Necrons, it caused a lot of rage due to the fact that the codex was
totally redone and changed, nothing was the same… which was great for the new guys wanting to do a 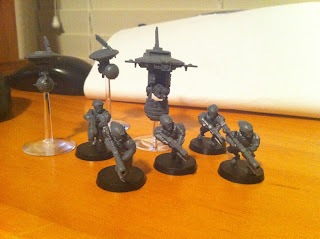 Necron army, but what about the old guys? GW never thought about that.

Some things that I can see always being in a Tau army is Hammer Head gunships, Broadsides, lots’ n
lot’s of Fire Warriors, Path finder Squads and the awesome new Riptide. But I am going to leave this to
Laern2Eel… I am sure you are all looking forward to his Tactica articles, I know I am!

Well that’s about it from me for now, hope you enjoyed it! Please don’t be afraid to give some feedback,
I would be more than happy to talk. Enjoy yourselves, from BIG MEGA V.