Greetings fellow Ork players (or rivals) and welcome to the latest entry in my Ork Tactica series! I'm covering the venerable (no pun intended) Deff Dreads today, some of the cheapest walkers in the game that are surprisingly deadly in the art of assault as befits their place in the greenskin hordes. I hope you enjoy this article! 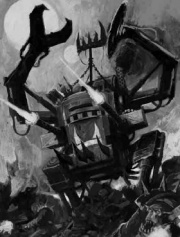 The Ork analogy to a Space Marine Dreadnought and a glaring example of the species warping proven technology to their own maniacal ends, a Deff Dread is a fairly inexpensive and powerful close combat that seems to line up well with its Adeptus Astartes rival on paper but ultimately falls short once theory evolves into testing. At twenty points less than a regular Dreadnought if both feature zero upgrades, the Deff Dread is a Walker on a budget with a lot of the usual goods; AV 12/12/10 with three hull points is what you should expect of these types of units, as is a fairly proficient melee profile. Weapon Skill 4 is about average and the Deff Dread even matches Dreadnoughts for raw damage output with five Strength 10 AP2 attacks on the charge due to its dual power klaws, though critically these are resolved at Initiative 2 rather than Initiative 4. This means that the Deff Dread is at a serious disadvantage against other Walkers built for close combat despite potentially having far more attacks due to its ability to possess up to four separate melee weapons, though at the very least it does still strike before Unwieldy units and thus can deal with most power fist wielders before they can harm it. Its ranged damage output is about as unimpressive as you would expect for an Ork-guided vehicle, what with Ballistic Skill 2 and two seemingly token guns rounding its wargear selection. What you can ideally plan for with a Deff Dread in the Shooting phase is either running towards the enemy or an objective, pinging a few models off with some lucky shots or vaporizing entire squads at super close ranges with a pair of optional Skorchas.

Unfortunately, getting into that kind of proximity with ideal targets isn't as likely as you would hope. Walkers have fallen massively out of favor in 7th Edition because they are typically slow, fragile and oriented around melee combat despite lacking any attributes critical to sustaining that kind of play-style. The competitive examples of these units typically have one of the following attributes; AV13, a movement value of 12" or more or have a transport that can safely ferry them across the battlefield. As you might have guessed, Deff Dreads lack all of those features; they don't have the AV13 front armor of an Ironclad, they move no faster than your average infantry unit and the Orks as a faction can't access inexpensive Drop Pods much like the Space Marines. If they could take Drop Pods or benefit from an increased armor value or some decent ranged weapons, Deff Dreads would most certainly have a better place in an Ork list; as it is, they are still reasonably cheap distraction units that, if ignored, will most certainly tear up entire squads at a time. Just don't expect them to survive against the stronger ranged armies or act as anything more than a fire magnet in your average game and you shouldn't be too disappointed, save for the fact that they eat up a valuable Heavy Support slot that will almost always be better served filling with Mek Gunz, Lootas and a few other highly valuable units.

This will largely depend on what you want your Deff Dread to accomplish in a standard game and whether you expect it to reach an assault at any point, something that generally isn't highly likely. The standard Big Shootas can be swapped out to Rokkit Launchas for some anti-tank shots at no additional cost, while the range deficiency shouldn't come into play too often when your Deff Dreads should generally be advancing up the battlefield anyway. Otherwise, Kustom Mega Blastas and Skorchas are your alternative ranged options; the former is too risky and doesn't provide enough incentive to take it over a cheaper and safer Rokkit Launcha, and while the latter does have a short range it will at least enable the Deff Dread to close with enemies faster due to not having to decide between running and shooting. Up close, the Skorchas are the best weapons by far as they will mutilate light to medium infantry with good template placement, but your alternative for a melee-centric wargear choice are additional power klaws. Additionally, they are best suited to taking advantage of a Walkers' capability to fire Overwatch with 2D3 automatic hits resolved at Strength 5 AP4. These are the most expensive upgrade but given that Walkers gain a bonus attack for each close combat weapon they possess after the first, a Deff Dread armed with four power klaws can output a whopping seven Strength 10 AP2 attacks on the charge backed by Weapon Skill 4 and Initiative 2; ouch! Lastly, Grot Riggers and Extra Armor are your generic vehicle equipment upgrades and can mostly be summarized like this; the former will almost never come into play given how fragile an AV 12/12/10 vehicle with three hull points really is, whereas the latter is nice if you have throwaway points so Crew Stunned results can't keep it locked in a bad position. All in all, once you factor in the lack of twin-linking on any of the guns as well as the Deff Dreads' poor Ballistic Skill 2 value, I would err on the side of saving points and keeping their pair of Big Shootas or switching to Skorchas if you have some points to spare; don't underestimate the value of a walker that can mow through both infantry and vehicles once it reaches close proximity. 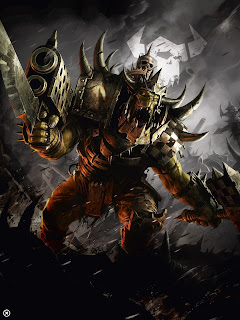 If you don't plan on using the Dread Mob - whether it be the formation or the alternative army list of the same name - then you should probably keep these as a one or two per army choice that act as buffers for the rest of your forces by drawing firepower that is often of a larger points investment than the Dread itself. They exist to draw attention away from your more valuable units and give them a fighting chance to make it around the battlefield to grab objectives and do the dirty work required of a traditionally medium to short ranged army (though can certainly opt for competitive artillery-based builds with the current codex). Try to give them a cover save as they advance and they should be able to withstand a decent amount of punishment before falling, and if they somehow close with the enemy, unleash their Skorchas (if you purchased them) on an enemy infantry squad and try to set up subsequent charges into vehicles and other units that can't feasibly destroy it. The Deff Dread is also a fairly synergistic choice with foot-slogging Orks given that it is a fairly large model that can provide cover to a lot of models with ease, though pairing it up with a faster moving force isn't out of the question as it can act as a mop-up tool in the latter turns of the game.

Here are a selection of builds I heartily recommend for Deff Dreads;

Deff Dread w/ two Skorchas - This is probably your go-to Deff Dread build if you want to mix it up in combat with enemies as quick as possible while also having some strong Overwatch and general infantry-clearing potential.

Deff Dread w/ two Big Shootas - The slightly less expensive standard load-out for a Deff Dread lacks the same punch between 8" and 1" away but can actually be fired as Snap Shots outside of Overwatch and have a very long range to try and add to a Shooting Phase where possible. Most useful if you don't expect the Deff Dread to survive past the first few turns against a ranged army as this is the cheapest configuration that can still possibly kill a few models in return.


Thank you all for taking the time to read this article, I hope you enjoyed it! Walkers have been having a rough time of it for multiple editions now and the Orky ones suffered some of the more painful transitions what with their melee-centric roles and fragility at odds with what is required of a competitive choice nowadays for models of their type. In any case, it does a fair job as a fire magnet for an army that generally can't soak up damage all that well; regardless of your position on the matter, I look forward to reading your feedback regarding the Deff Dread and how it has performed in your games. Thanks again!
at 8:28 pm