Welcome ladies and gentleman to another entry in my Space Marine Tactica character review series, with the focus of this particular authoring being one of the most legendary icons of heroism and resolve among the Imperial Fists, Captain Darnath Lysander, the commander of the Chapters' 1st Company. I hope you enjoy the article! 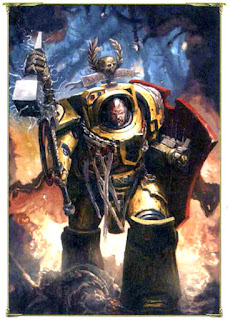 Quite unlike the Shadow Captain I reviewed earlier in the week, Lysander is an utter juggernaut in the assault phase and to this day ranks as a terrifying combatant that few foes would ever willingly face. While his skill-based stats are in keeping with a standard Captain with Weapon Skill 6 and Initiative 5 usually proving more than capable of going toe to toe with most rivals, Lysander has the undisputed honor of wielding what amounts to a titan weapon in the form of his mighty thunder hammer, the Fist of Dorn. This provides a Strength bonus of +6 to Lysander rather than x2 as would usually be the case with a thunder hammer, meaning that he will usually strike at Strength 10 and is not as worried about negative Strength modifiers imposed by psychic maledictions or unique abilities. Having three attacks at Strength 10 that benefit from a single re-roll of a failed to-hit roll due to Master Crafting is very impressive as it puts the fear of death in the hearts of any Toughness 5 or lower model that lacks the Eternal Warrior special rule, while models of any size - be they monstrous, gargantuan or vehicular - are easy prey to Lysander. That his attacks are AP1 means the chances of outright destroying a vehicle with any single attack are greatly increased, while the Concussive special rule serves to even the playing field in spite of Lysander using an Unwieldy weapon - as if hitting that hard wasn't enough already! This instantly ensures Lysander can match up against virtually any foe in a melee, though it is prudent to note that he lacks any ranged capabilities and thus will never be able to contribute in the Shooting Phase outside of making a Run move.

Perhaps more famous than his outstanding melee capabilities is Lysanders' ridiculous durability that more than equals the Chapter Masters wielding the Shield Eternal, what with four wounds at Toughness 4 giving him a lot of leeway to take on incoming wounds in place of his battle brothers. His 2+ armor save and 3+ invulnerable save courtesy of a personalized suit of Terminator Armor and a Storm Shield confer upon him the best saving throws possible, while Lysander critically possesses the Eternal Warrior special rule. As if this wasn't enough, Lysander even utilizes the Feel No Pain special rule provided by his preset Warlord Trait aptly titled Iron Resolve, a fitting description for a true Son of Dorn. Having a 5+ die roll on top of his already amazing saving throws allows Lysander to discount a full third of any unsaved wound he suffers unless they have the rare distinction of bypassing his Feel No Pain, usually from attacks that are either Strength 8 or inflict Instant Death. All of this presents a daunting prospect those facing Darnath in any type of engagement; to remove the Imperial Fists' 1st Captain, one must strip off every individual wound in a grueling fashion that is often times a pointless endeavor short of relying on Stomps or Destroyer Weapons. He is thus easily the best wound tank of any special character in the Space Marine codex and can act as a defender of his lesser brethren in the face of any foe, but always be mindful of the weapons that can put an end to him - Destroyer Weapons are truly a force to be reckoned with even for a model as staunch as Lysander.

Given that he is clad in Terminator Armor, there are a few additional quirks to keep in mind here; he is capable of Deep Striking with other Terminators and so on, he is Relentless (not that it matters for him personally) and is incapable of performing Sweeping Advances, eliminating one of the best ways of removing enemies in the Assault Phase. This naturally means that outside of utilizing the Deep Strike deployment method, Lysander has few ways of reaching combat by himself and is thus reliant on transports such as Land Raiders or even Drop Pods selected from the Fast Attack slot. And They Shall Know No Fear is an amazing rule that is essentially a superior version of Fearless, while the Imperial Fists' Chapter Tactics confer special damage bonuses against buildings. These are fairly minute traits though and don't really compare to Lysanders' one support ability; manifesting as the Icon of Obstinacy special rule, this allows all friendly warriors hailing from the same Chapter to re-roll any failed Morale, Pinning and Fear tests which is a great ability to have given that Space Marines are still vulnerable to certain aspects of the Leadership system. Confusingly though, all Imperial Fists possess the And They Shall Know No Fear special rule and are thus immune to Fear anyway, making that particular aspect of the rule seem rather oddly out of place.

Lysander is one of the most durable characters in the game and taking advantage of his nigh invulnerability to most forms of attack is key to unlocking his full potential. This principally leads to the First Captain standing at the forefront of an Imperial Fist spearhead, using his strong saves, Feel No Pain and Eternal Warrior classification to soak up all the wounds that you simply can't afford the rest of his attendant unit to suffer. However, it might also be prudent to keep him to the center of a squad if you are up against an army with lots of Destroyer weapons capable of punching holes right through Lysanders' considerable defences - Eldar are your main worry here - so as to not risk fate by potentially leaving him outside of Look Out Sir range. As for roving around the map by way of transport, the availability of Drop Pods in the Fast Attack slot allows you to Deep Strike Lysander in close proximity to high value targets on turn one via the Drop Pod Assault special rule. Alternatively, you can employ an expensive Land Raider Assault Transport as a much more expensive and arguably less reliable method of ferrying him around, albeit one that is immune to Interceptor fire. You can also just Deep Strike him with a Terminator squad should you fancy the cheap route, but this is very imprecise and is arguably not worth risking a character as expensive as Lysander with.

Lysander is a train shaped in the form of a hammer that smashes through all opposition with contemptuous ease, scowling at the mere thought of being hindered even by worthy opponents such as Daemon Princes or Phoenix Lords. His Strength 10 AP1 attacks should theoretically rip apart almost anything with little difficulty, while his four wounds backed by incredible saving throws and Eternal Warrior allow him to endure more punishment than most other characters of that price point. Opponents with a lesser Weapon Skill value will usually be hit three times on average by Lysander in any standard combat round without accounting for charge bonuses which will often be enough to cleave them in half, and Unwieldy won't be too much of a weakness against most foes. Just be sure to avoid Wraithknights or Bloodthirsters of Insensate Rage and other Destroyer weapon wielding monstrosities, though in the former case an attendant squad will be able to tank most of the hits provided a lucky Stomp doesn't just end the fight immediately. Speaking of which, it is pertinent to note that characters such as Lysander are more vulnerable than ever in an edition where Destroyer Weapons, Stomps and so on can annihilate even Eternal Warriors with a single blow whereas the hard hitting ranged units are more than capable of eliminating Lysanders' bodyguard in record time, with him shortly to follow in such dire circumstances. Regardless, he exists to soak up damage for his likely expensive squad and works best alongside a mixed assault and ranged force; there's only so much that can be done in a melee, after all, but you still want to make the most of his very useful Icon of Obstinacy rule whenever possible. I find that Honor Guard accompanying him in a Drop Pod seems to be the most points efficient, reliable and generally ideal choice for an army led by the venerable Captain of the 1st Company, but Terminators armed with Thunder Hammers and Storm Shields are also a thematic bodyguard - pair them up with a Land Raider or ground forces bearing Teleport Homers for precise strikes at the opponent.

Thank you all for reading this article, I hope you enjoyed it! Lysander still ranks as one of the scariest fighters the Space Marines can offer up in keeping with his forebears, including the truest Angel of Death in the form of Sigismund himself. If you have any feedback for me with regards to the content presented here then feel free to leave a comment below and I will do my best to reply as soon as possible. Thanks again and have a great day!


My kind were created to feel no fear, but we understand it. We were all once men who felt fear as does anyone else, and we must know it because it is a weapon we wield.
- Darnath Lysander, Captain of the Imperial Fists
at 12:38 am