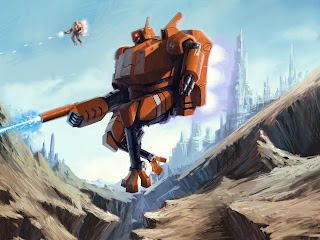 Hey guys, I am Learn2Eel and today I am going to be talking about the new Farsight Enclaves Supplement. The fluff expansion on the Enclaves as well as the titular man himself have been really intriguing, particularly the short paragraph that confirms the Dawn Blade is the sole reason for O'Shovah's extended life. However, what has really caught my attention - and no doubt that of many others - is that the supplement gives us what so many have been yearning for, both for competitive and themed armies; a force composed entirely of battlesuits. With that said, I hope you enjoy this article! And just a quick note, progress has stalled on the Necron and Vampire Counts articles due to an unfortunate set of circumstances, and I am unable to give a solid date as to their scheduled release. My sincerest apologies!


Just a few days ago, the second Warhammer 40000 codex supplement was released upon the digital world, confirming that these themed additions are very real and here to stay. The latest one focuses on the Farsight Enclaves as well as the dark truths behind the titular hero, and it is certainly a splendid read for those interested in more Tau background. That it finally clarifies both Farsight's extended lifespan and the true nature of the Dawn Blade was quite the surprise, but a welcome one at that. However, what many were really interested in seeing were the new rules; in the context of the Iyanden supplement, how would this new book change the way a Tau army functions, and what new options would it present to those invested in the Greater Good? There are several to note - such as a Riptide classed as an independent character - but the most prominent and potentially ground-breaking is easily the stipulation that Crisis Teams are Troops choices in an Enclaves army. Now, Crisis Teams have always been the staple unit for Tau in each of their three incarnations from their initial release to their present form; they are awesome, they are iconic and importantly, they have always been a competitive choice. The recent codex FAQ for the Tau only made it even more so, with the much awaited option to double up on weapons without twin-linking them finally granted to eager players. After this important change, new Crisis Suit varieties have taken the lead in terms of popularity and effectiveness; twin plasma rifles and dual missile pods are easily the most heavily used, though other configurations such as two burst cannons or fusion blasters are very much viable. Overall, Crisis Teams offer the army the cheapest and most effective source of high strength shooting that is also mobile; while Broadsides equipped with high yield missiles and smart missiles may dish out more effective firepower, their sluggishness is very much a limiting factor to their use. Light up any unit you need destroyed with Markerlights, expend either two or four solely for Ballistic Skill five or also for Ignores Cover and go to town on vehicles, monstrous creatures and infantry alike. They are a knife that can cut any form of meat with precision and grace.

For many prospective and current Tau players, the idea of an all battlesuit army has been around since the Tau were first introduced into Warhammer 40000. An army consisting entirely of rounded, slickly designed models ripped straight from popular anime shows such as Robotech or Bubblegum Crisis: 2042? Who could resist such a force, even if its relatively low model count and fragility on a points to model basis do give it some very serious weaknesses? I personally know several hobbyists that actually really wanted to do a Tau army, but held back simply because they couldn't run a legal all-battlesuit army; call them crazy if you like, as the army is very fun in general, but I can't deny their reasoning. Though many might now feel that it invalidates their given theme or they don't want to shell out the cash for a supplement to run such a force, I say that it is well worth the investment; as well, there's no reason you can't merely use the Farsight Enclave rules without actually adopting their colours and stratagems. If I see yellow and white Tau standing across from me with a Riptide attached to a Crisis team, I won't mind at all. Why? Because the hobby is about fun first and foremost, that's why, and an all battlesuit army is just awesome!

So what are the limits of the army, particularly when taken alongside an allied detachment of the regular Tau codex? Below the sweet spot of 2000 points, an army has access to up to five Riptides, first and foremost, and eighteen Crisis Battlesuits from the Troops slots alone; add in bodyguards and the like, particularly for Farsight, and you have thirty or so potentially. Did I mention you can also take thirteen Broadside battlesuits if you include their character, much like the fifth Riptide? Yowza! What Battlesuits have always offered is reliable, mobile high strength shooting at a low price; Crisis and Broadside teams tend to be geared for taking on monsters and tanks, while Riptides blast Infantry apart like few other units in the game. So the big question is, would this army work on the table-top as well as if you just had Fire Warriors instead? My answer is a pretty solid 'no', and the reason for this is two-fold. Firstly, as cool as it is to have a lot of Strength five and higher shooting on one to three models, they don't match the sheer cost-effectiveness in terms of Strength five shooting that Fire Warriors put out, particularly at longer ranges. A squad of twelve Fire Warriors is cheaper than a three-strong Crisis Team equipped with burst cannons, fusion blasters and the like, and in the case of the burst cannons, puts out twelve shots at thirty inches, and twenty four shots at fifteen inches. The Battlesuits have to make do with twenty four shots at only eighteen inches; that three inches compared to the rapid-firing pulse rifles isn't as big as you would think, though being able to shoot earlier does make a big difference in the case of the thirty inch single shot range. Additionally, Fire Warriors receive all kinds of shooting benefits from Ethereals and Fireblades as well as Markerlights, while Crisis Suits can only benefit from the laser lights.

Crisis Teams armed with dual missile pods do have both the range and strength advantage over Fire Warriors, but this leads into my next point; a unit of twelve Fire Warriors is not only cheaper, but tougher as well per model. Twelve Toughness three and 4+ armour bodies are going to survive a lot longer than three Toughness four and 3+ armour models in almost all cases. That the Fire Warriors have double the wounds and don't fear instant death, while typically not needing to get close to the enemy - in the case of certain Crisis Team configurations - means that even despite the added mobility of Crisis Suits, they are both harder to kill and easier to support in a traditional gunline. Does this mean though that Fire Warriors are 'better' in all cases? Most assuredly not, as there are cases against certain enemies where the extra Strength seven shooting will actually make a massive difference, as well as the Jetpack classification. Tyranids are a good example, as are any army that fields a horde of lightly armoured vehicles, such as Speed Freak Orks or mechanized Imperial Guard. However, given that 6th Edition Warhammer 40000 is ultimately a game based on objectives above all else, I have to say that Fire Warriors - and hell, even Kroot (I was keeping this "Tau" themed, hence the lack of mention) - bring more wounds, more bodies and all for less. In games of 1500 or so points, one usually takes three Troops choices; in these circumstances, three squads of twelve Fire Warriors will give you more survivable scoring units as opposed to three teams of three Crisis Battlesuits, and at a lower cost as well. Against enemies that employ lots of Strength eight shooting, such as Grey Knights or Space Wolves, Crisis Battlesuits quickly become a liability, even with their jetpack moves; there is only so much terrain to hide behind, and so little time to contest objectives if you don't actively engage the enemy. As awesome as scoring Crisis Battlesuits are, particularly given their potential for a late-game objective grab through the jetpack moves, I think a mixture of Fire Warriors or Kroot with the battlesuits will likely prove the popular option for a Farsight Enclave army, at least in a competitive sense. Freeing up the Elites slot for Riptides and Stealth Teams alone makes their classification as Troops more than worth it.

Now, I hope this doesn't dissuade anyone from running an all battlesuit army; there are some truly ridiculous tricks you can pull with it, and no army in the game - aside from some infamous Imperial Guard builds - will come even close to the amount of high strength shooting you put out. Few armies want to face twelve Crisis Suits and six Broadsides all with missiles, as well as three Riptides armed to the teeth with Ion Accelerators and fusion blasters. Very few indeed, even an army with three or so Land Raiders - try winning the game through objectives with those beasts guzzling up all the points and see how badly they will fail, and that is before the three Riptides are thrown in! And the scary thing is, this army can easily fit in 1850 points. You can then add a Commander with a Marker Drone ensemble so as to not break the 'all Battlesuit' theme and designate something to die each turn. Admittedly, like any Tau army, you need several Markerlights - not just aimed at one unit - to do truly significant and reliable damage each turn, though to be fair, that many missiles and large blasts are unlikely to 'miss'. Whether such an army will truly worry the top tournament armies remains to be seen - my guess is it won't - but regardless, a host of Tau players and onlookers have finally been given the means to build their dream anime army. Personally, I'm going to have to make some tough decisions on what 40K army to do next; I have a Grey Knight 'shunt' army in mind, as well as a Salamanders force, though just the idea of an army almost recreating a childhood favourite of mine - Bubblegum Crisis - may be enough to lure me in.

I hope you enjoyed this article! I'm currently getting back into the mix of authoring after a hefty lay off due to some unforeseen difficulties, so if my content is not up to scratch, I do apologize and I hope to get my writing back up to scratch. Until next time, Eel out!
at 12:34 am