Hey there everyone, I am Learn2Eel and today I'm excited to bring you a trio of reports, and some lovely pictures to boot. I had a long day filled with fun, jubilation and even surprise; indeed, the Heresy has arrived. But not just the Heresy it seems, but Apocalypse as well! I hope you find some entertainment out of this article!

Today was always going to be a special day in my hobby heart, with me finally getting my hands on a copy of Horus Heresy: Betrayal, a true wonder of a book. However, there was an unexpected hitch on the way; Apocalypse reared its gruesome head at my local gaming store, and I couldn't help but participate. Though I don't have pictures, the battle was suitably cinematic and bloody; featuring four - I wish I was exaggerating - Lords of Skulls, half a dozen or so Baneblade variants, and even some classic Macharius and Malcador tanks. Hell, even a Warhound Scout Titan joined in on the fun, with formations such as a column of Dark Eldar Ravagers and my own Tau Battlesuit Strike Force all taking part in what was a literal bloodbath. I entered just as the first 'break' was nearing its end, and the game had already reached an unseen pinnacle of violence; a Stompa and three other super heavies had already been obliterated in that time! The two sides put up a gruelling fight, but victory ultimately went to the Chaos side; the Imperial forces simply could not muster enough firepower to deal with the four Lords of Skulls, whom despite losing all but one of their number by the final turn, proved to durable and damaging for the Baneblades and Stormlords to survive. They crashed into our lines early in the game and shredded each of our super heavies, leaving my noble Riptide to answer the call and destroy not one, but two of the monstrous daemon engines through its nova-charged Ion Accelerator.

There was some hilarity throughout the game, with a Lord of Skulls nearly destroying itself with a Skullhurler, nearly an entire Tyranid army evaporating under pressure from a Baneblade, Mephiston surviving all of the firepower from a Warhound Titan without so much as taking a wound, and poor Marneus Calgar and a Terminator bodyguard being slaughtered in a matter of moments. Apocalypse truly is back and better than ever, and I found the lack of Destroyer weapons, given the wide range of players both youthful and experienced, to allow the armies some breathing space to deal some damage of their own. Some quirky moments still exist; Mephiston arrived late into the game through strategic reinforcements, and despite using his Finest Hour and his psychic mastery all in his favour, he failed to do anything save laugh in the face of both a titan and a Lord of Skulls. All in all though, it was great fun with the local gaming crew and I look forward to participating in, or hosting, more games of such a size.

As my team's captain, despite arriving late into the set, I won a pair of tickets to enter into the store draw for prizes. As I rarely win anything outside of trophies for gaming events, I quickly forgot them and, during the lunch break, was far more focused on a little (cough) gift that made its way into my lap. As well, two tickets was barely anything in this draw, as I hadn't really bought anything or brought in an Apocalypse book to boost those numbers. As I returned to the store from my lunch break though, clutching the titanic Betrayal book in my needy hands, the local store manager first gave a friend of mine his prize - a cool Apocalypse artwork - and then proceeded to gift me with the amazing Horus Heresy: Collected Visions book. A compilation of highly detailed art spanning the breadth of the entire Heresy, winning this as a prize merely for leading the Imperial team left me suitably dumbfounded. As he handed it to me, I was left with a blank stare, before I quickly readjusted my weight to handle holding two three hundred page hard-cover books! Those two alone filled up one of my larger carry cases, and easily outweighed my Vortex Grenade carry case, even though it was overflowing from Vampires, Chaos Space Marines and Tau. What a day! My partner in crime, Mr Jax, will likely be all over this; expect a book review from in the coming weeks, though as I said earlier, don't hold your breath on that one. 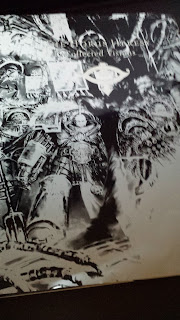 The cover art alone is well worth the price of admission, I knew as soon as I glimpsed it that this would be a fantastic read. 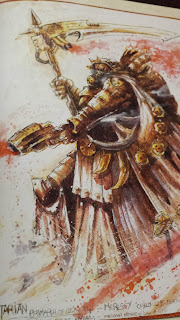 Guess who? Yes, even the Primarchs themselves are given not only their own feature art, but a profile and a short story or to so as to give them some additional character development. These are amongst the most interesting characters in the Heresy era, and few more so than Mortarion, the Reaper. Born of Barbarus, the hulking angel is as much a gruesome product of plague as he is a ghostly figure, clad in baroque green armour. 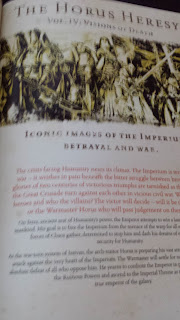 The book isn't entirely given over to artworks, with plenty of detailed descriptions of all events comprising the Horus Heresy, from the Warmaster's corruption to the tragic fall of Sanguinius at the apex of the gruesome war. This is a great work that I really recommend to anyone interested in the darkest days of Games Workshops' flagship franchise.

And so we come to what was probably the highlight of my day, and quite possibly the book with which I have been the most excited for throughout my time in the hobby. The first, and primary, rule supplement for the Horus Heresy is an incredibly detailed, high quality work that is well worth both the high cost and delivery times; the same can't always be said of some of the hardback codices released so far. That it is nearly three hundred pages, each constructed with lavish descriptions and intimate images really gives perspective on the value of Forge World books, and after reading even the barest glimpse of all that it has to offer, I'm confident that the development team have struck gold with the return to the origins of corruption. My full Tactica series will be following very soon, with first a look at "30K" lists versus other 30K lists, and then how this army should function against the 40K codices. Whether I do each as a standard Tactica has yet to be determined, but as this is theoretically an entirely separate games supplement, I feel the distinction is large enough to justify the additional coverage. For now, I think the pictures describe better than words just how excited I am to get through this momentous work. I hope you enjoyed this article, and stay tuned for our Heresy Tactica series! 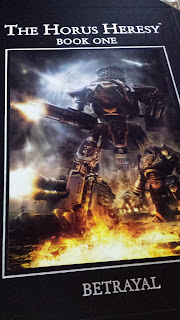 What more can I say about the artwork? It is fairly typical of a Forge World work - heck, almost every Imperial Armour book you see has a Reaver Titan on the front cover nowadays, even the newest Apocalypse book! - but it still looks awesome. 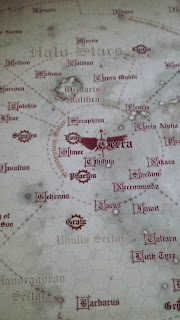 Terra shall fall. Or at least, that is what the Warmaster aims for. Even at the start of the Heresy series, Horus' intent is clear, and it only serves to give us - the audience - a tantalizing glimpse of what awaits us. The Burning of Prospero, the Dropsite Massacre, and even the climactic duel in the orbit of Terra itself. Will we one day see official rules for the Emperor? 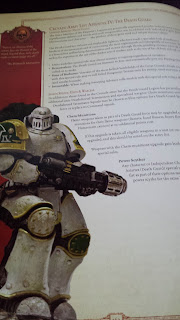 I love that each rule expansion in the Horus Heresy series will focus on a set number of Legions, each with their own unique rules, units and Primarchs to fight the most brutal conflict in galactic history. Though the changes are usually minor enough not to make the armies radically different, they are significant enough that each Legion has their own distinct strengths and weaknesses that really distinguishes them from their fellow Legionnaires. How will the more unique Legions, such as the psyker-heavy Thousand Sons, or the rival Iron Warriors and Imperial Fists, all be represented? Will the books account for the descent into daemonhood of Primarchs such as Angron and Mortarion? These are questions that I simply can't wait to be answered, but for now, what we have been left with not only sates my desires, but actively encourages me to start up an extensive Heresy army. Such is the quality of this work, and the drama of this tale.