Hey guys, Learn2Eel here and today I want to talk about my new Vampire army (bleh!) and provide my thoughts on an army list I have been cooking up. For those wondering, I will be going ahead with the Necron Tactica first up, but I am still working on getting those articles up to an acceptable level. With that in mind, I hope you enjoy this article! 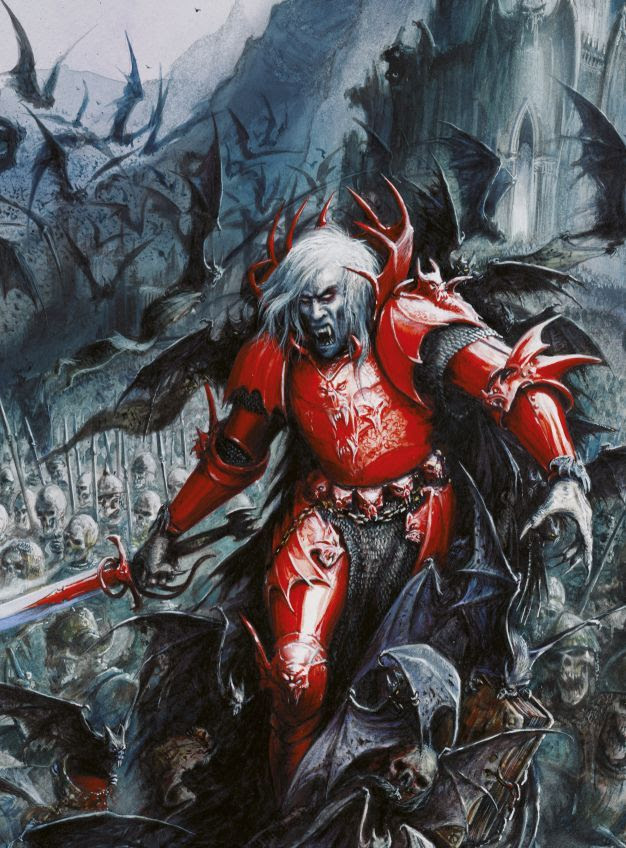 As you may have seen recently, I've been giddy with excitement about the new Vampire Counts army the humble Mr Jax decided to gift to me. The models are awesome and they look like they will be a joy to paint....for someone else. I've been reading through the army book extensively lately, and I must say that the background and artwork are amongst the best I've seen from any hardback Games Workshop have released. Despite having sat on the shelves for a year or two now, it is still easily one of their most impressive works. But what I like the most about the book is the army list; it really rewards experimentation with lots of good or solid units and few real stand-outs or "misses", something that has come to be associated with Phil Kelly codices and army books. They are a well balanced force with lots of chaff, strong magic, amazing combat characters and devastating monsters; the flexibility and adaptability of the army to almost any other force is fantastic, and is a big reason why they will be our new main display army for Warhammer Fantasy.

Going through the army, there are a lot of tough choices to make based around which units to use; I really like Hexwraiths and Spirit Hosts, but I simply don't have the room to fit both of them in with any meaningful capacity in mind. Similarly, the choice between Terrorgheists and Mortis Engines has me grating my teeth; do I want the ridiculous damage capabilities, particularly against elite armies and chaff, that the Terrorgheist offers? Or do I want the superb support abilities of the Mortis Engine that provide my force with strong Regeneration saves? This really is the best kind of army to play; one with few obvious "take me" units, but a wide range of choices that you actually feel compelled to try and use both competitively and in less serious environments. In a meta where cannons are lacking, for example, I may find myself using a Strigoi Ghoul King on a Terrorgheist with Scabscrath for some shrieking good fun.

From what I have built so far, I've been able to not only make up a 2000 point army list, but actually get a few games in - early success has been a helpful morale boost, but dice rolls did play a big part in those games. That, and a pair of Terrorgheists is rarely what an opponent wants to see staring them down. Overall, I'm pretty happy with the army list; it is mostly very mobile, it can deal with nearly any threat and it has a good number of drops. Though certainly not the best army list, I think it does decently well and it is probably a very typical Vampire Counts army list for general purpose gaming. Keep in mind that the Core choices in particular are based around the models I have available to me at the time of writing.

Lords - 500
Vampire Lord w/ level three wizard, lore of the vampires, heavy armour, barded nightmare, red fury, quickblood, ogre blade, talisman of preservation, the other tricksters' shard - 500
Pretty standard 'blender lord', though the restrictions leave me with a 3+ armour and 4+ ward save. She is there to both reave units and kill characters with the Other Tricksters' Shard, though I wonder if I should drop that to fit in some better defensive gear so she has a 1+ armour save. This would also involve changing the regular Vampire; I have alternate builds below.

Alternate Vampire Lord w/ level three wizard, lore of the vampires, heavy armour, barded nightmare, red fury, quickblood, ogre blade, enchanted shield, talisman of preservation, potion of foolhardiness - 495
I actually think I prefer this build. She loses out on forcing enemies to re-roll ward saves - which won't come in too handy that often anyway - but gains a bonus attack when she needs it to really blend a unit, as well as a very tasty +1 armour that makes her so much harder to kill.

Heroes - 178
Vampire w/ level one wizard, lore of death, heavy armour, lance, barded nightmare, dread knight, potion of foolhardiness, enchanted shield, dawnstone - 178
This is the one area I am sort of divided on. She is hard to kill with a 1+ re-rollable armour save, but I wonder whether Dread Knight and the Potion of Foolhardiness should be swapped out for Beguile to both fit my Lahmian theme and give her an extra defensive boost. If I switch the Vampire Lord, I can do this with the Vampire.

Alternate Vampire w/ level one wizard, lore of death, heavy armour, shield, lance, barded nightmare, beguile, dragonhelm, dawnstone - 185
Much like the Vampire Lord, this build swapped out some offensive stuff but kept the 1+ armour save with re-rolls, though she now also has Beguile to really annoy enemy characters and monsters. I could even drop Beguile to give the Black Knight unit the Banner of Swiftness, which would probably be more helpful.

Core - 500
Crypt Ghouls (20) - 200
I would prefer to have thirty, but at the moment, I can't do it because of the lack of models. Still, they make a decent combat unit - particularly with augment spells such as Vanhels' or Hellish Vigour thrown into the mix.

Skeletons (20) - 100
Similar story to the Ghouls, but they make for a decent little road-block unit that can at least hold a unit up for two or so turns.

Dire Wolves (5) - 40
These things are great chaff units that are also perfect for hunting war machines. I would take another two units of five if I had the models, though probably for 2500 point games.

Special - 368
Black Knights (13) w/ champion, standard bearer, musician, barding, lances - 368
What more can I say other than they are a fantastic bodyguard for my two Vampire characters and do some decent damage on their own? These guys have not let me down so far and probably will continue their high performance.

Terrorgheist - 225
These things are undeniably brutal. Decent combat stats, particularly against enemies it can Thunderstomp, as well as flying, regenerating wounds every time a friendly Lore of the Vampires spell is cast, and a ridiculously good "shooting attack". They are gold, and have been the stars of my games so far.

I like the army list, particularly given that the Core isn't exactly what I want, as it fulfills what I love about Fantasy - a brutal combat lord, some nasty dragon-like monsters and a large cavalry formation - while providing the Undead flavour that is really fun. In my first game, a Stegadon with a bolt thrower pierced my Black Knights and killed three in total. My response was to cast Invocation of Nehek and resurrect all three! Promptly, the nearby Terrogheist flew into a rage and screamed the poor giant lizard to death in one salvo. Lovely!

What I am looking for is ways to improve this army list, while keeping in mind that I am no real tournament player. I like playing friendly games against fellow Warhammer Fantasy armies with the models I enjoy, such as Terrogheists and my Lahmian Vampires, though I don't want to alienate them by taking crazy good army lists. I am also considering how to expand my collection in several months time into a more foot-slogging army, mostly to vary up my collection and have some different experiences with a whole slew of other units. Crypt Horrors, Mortis Engines and the like seem like good candidates for additions, as well as a mandatory large unit of Grave Guard. However, what I really want to hear are what kinds of Vampire army lists you guys are running. What do you find works for you? What units do you prefer in your given meta? Is a level four wizard truly mandatory in 2000 point games, or can I get away with it owing to my blender lord? I would really like to hear both your feedback and thoughts on the Vampire Counts, because they do seem like a popular and diverse army with no truly "correct" strategy to using them.

I hope you enjoyed this article, and feel free to leave a comment if you have more thoughts on the matter!
at 11:20 pm